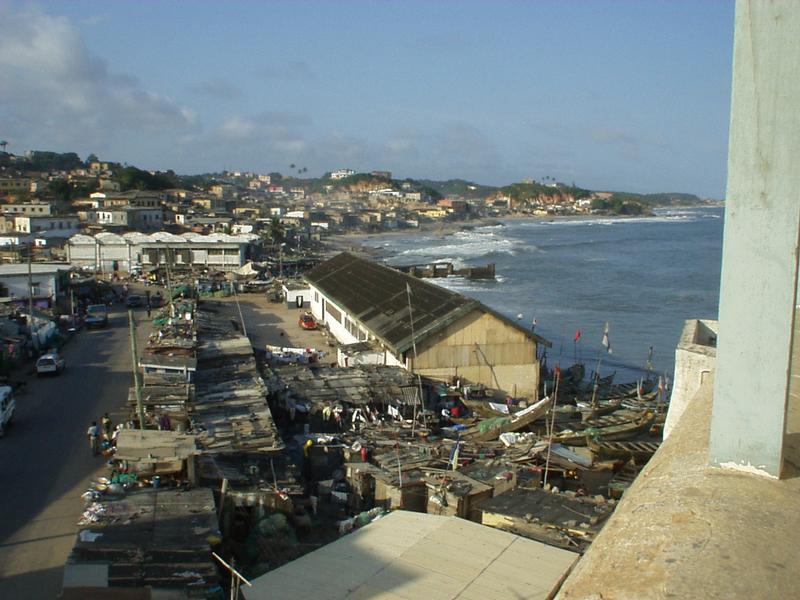 When we walked out of the airport after more than a 24 hours journey we were meet by a group of twelve to fifteen smiling Theological Science members were waiting to greet us. The photographer hired for the event began taking pictures. A video camera was also taking in the arrival. I was presented with a beautiful bouquet of fresh tropical flowers. Amid much hand shaking and hugs the luggage was loaded into a car and we were off to the Guest House at the University of Ghana where we were put up for our visit.

After a short refresh and change of clothes, we joined the group outside for our official welcoming ceremony called an Akwaka. There was food, drink, toasting, introductions and music. It brought tears to my eyes to hear Doctor's words which we are so familiar with set to music and song. Such as: "To every man there openeth a Way/The High Soul climbs the High Way,/While the low soul gropes the low,/And in between on the misty flats,/The rest drift to and fro./But to every man there openeth/A High Way and a low,/And every man decides the Way/His Soul shall go." And another favorite, "I thank you Father that you?ve heard me/ I know that you hear me always/And I know that you hear me and care for me/Always in all my ways."

The conference began with the Meditation Service at 10 PM Saturday night. We were asked to fast from noon Saturday until after the service. It was a remarkable experience. Everyone wore a white robe. We were told to be sure and bring appropriate white dress or robes for this service. The service ended at 1 AM Sunday. 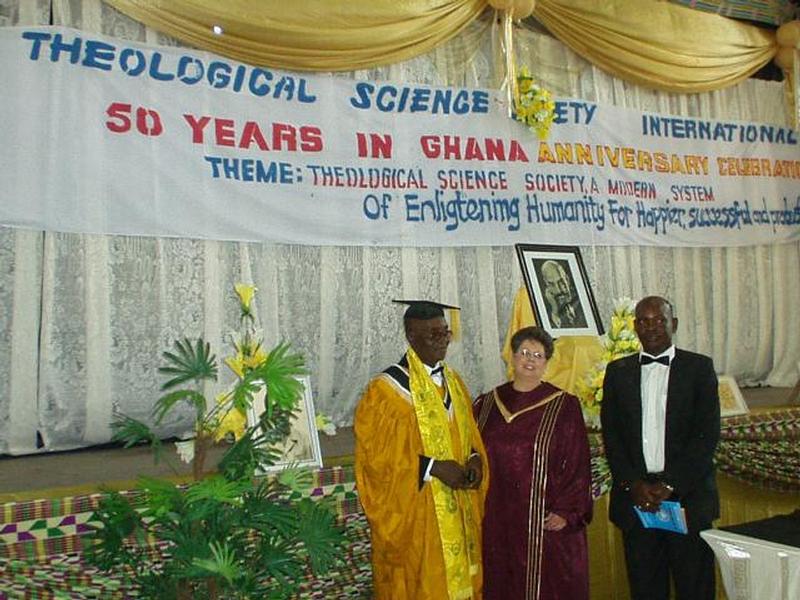 Ann w/ Grand Sovereign and George after service under banner 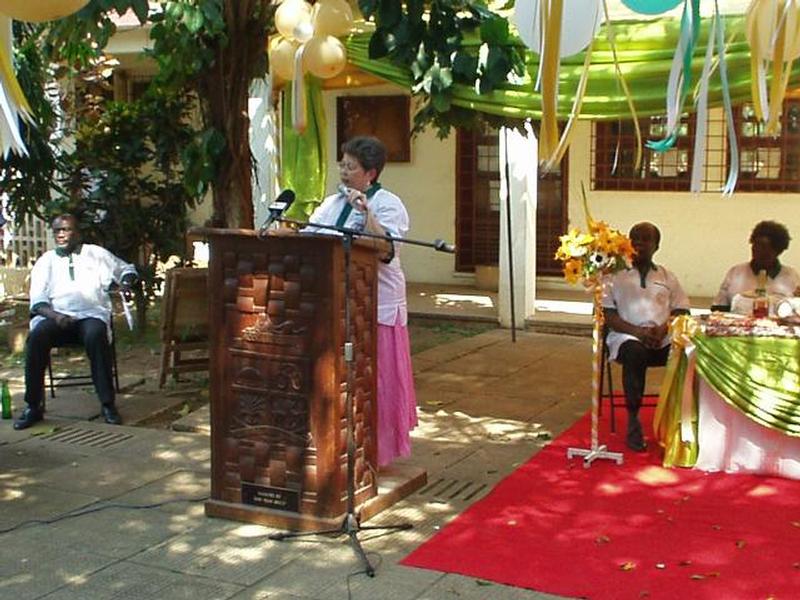 It was a quick sleep and turn around to be back in time for the 8:30 AM Valedictory service on Sunday morning. Participants for this Conclave Service were in a black suit and tie, the women in black skirt and white shirts. I choice to wear my ministerial robe for this occasion. For the entrance the collars were yellow and switched to purple after the Grand Sovereign enters.

Notice the white shirt with green trim I and many of the others are wearing, it has the TSS emblem on it. Norm and I were given these shirts and asked to wear them at the luncheon. 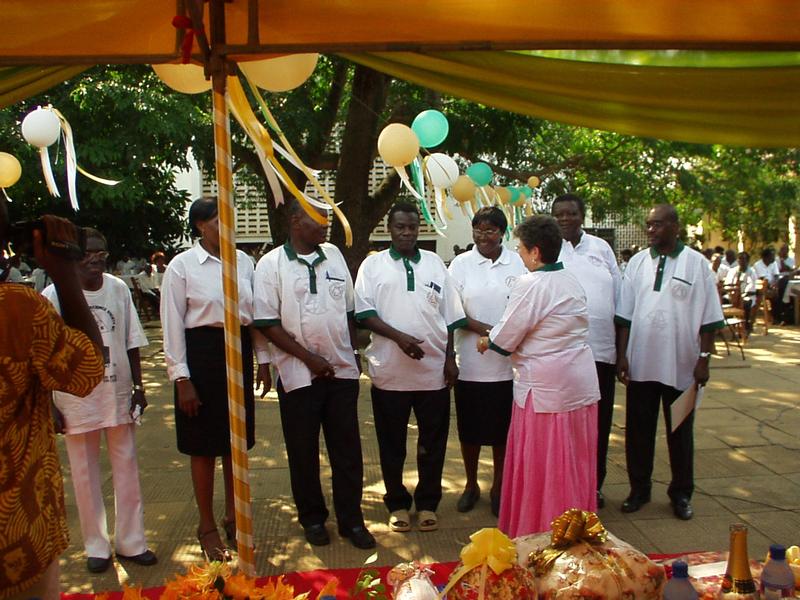 Handing out certificates at luncheon

I spoke about my relationship with Dr. Carruthers and Ruth and my early training in Theological Science. Many certificates of acknowledgment were handed out.

Here I am helping to pass them out and shaking hands. A good number of the participants have been active in the Lodge for many years. There are 18 branches or Lodges in West Africa, one in Nigeria and the others in Ghana.

The conference ended with the evening conclave service. I was asked to give the sermon at that service on the Power of Thought, after which the gates were closed and the service ended. 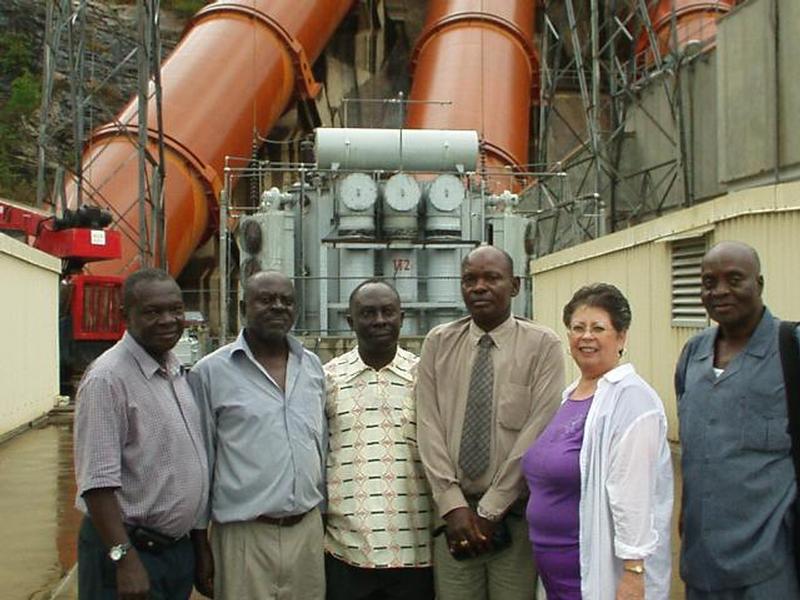 What I refer to as the "Official State Visit" portion of our trip began on Monday. Our host on Monday was the Odumase Krobo Lodge. They arranged for us to tour the Hydro Plant. It rained that afternoon and got soaked. I am still wet in the picture here with some of our hosts and the Grand Sovereign plus the tour guide. 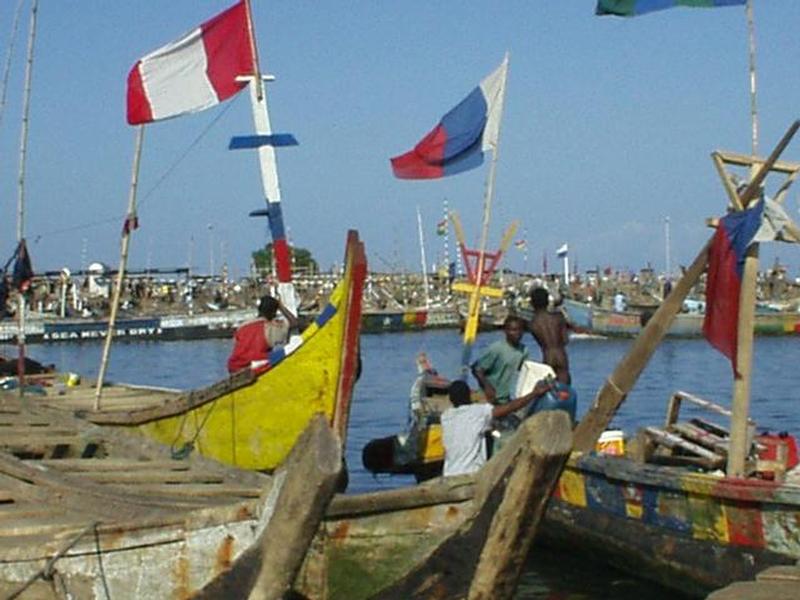 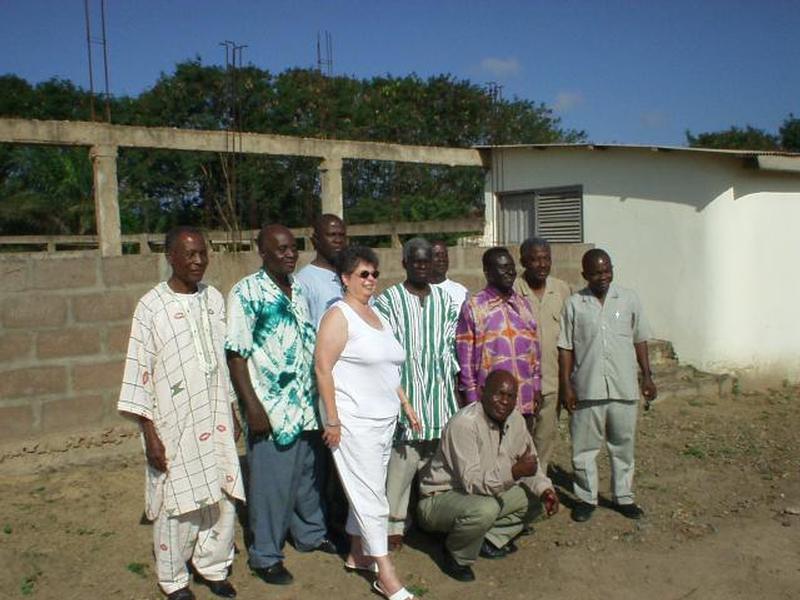 Our host on Tuesday was the Tema Lodge. An Akwaka was held at the home of the Sovereign for the Tema Lodge. We also visited the grotto they are building and their current meeting place.

We got a lot into Wednesday as we were getting close to the end of our trip. The first stop was the Cosmic Villa home of the Swedru Lodge. We where welcomed with an Akwaka. The fresh coconut was refreshing. From Swedru we drove on to Cape Coast, stopping at the home of the late Emmanuel K. Essel. It was a moving visit. Essel's widow is very sick, pleasantries were exchanged and powerful prayer said for her comfort. 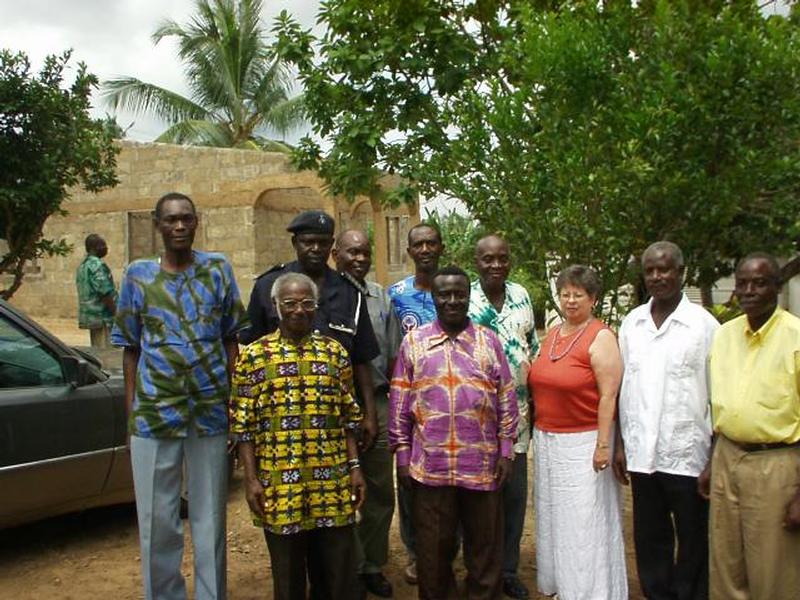 Our next stop was the Cape Coast Castle where we were met by the Cape Coast Lodge members and all enjoyed a tour of the castle. After our tour we went next door for refreshment. There both Norm and I were again presented with gifts which we are modeling in the last picture.

Our last day in Ghana was Thursday. It was spent looking around Accra, visiting a local museum and having lunch with members of the Accra Lodge at the University of Ghana. Lodge members followed us to the airport for final good byes. We left Ghana filled with love and gratitude, joy and inspiration, a bit tired from our fabulous visit and certain we'll make a return visit some time in the future.' 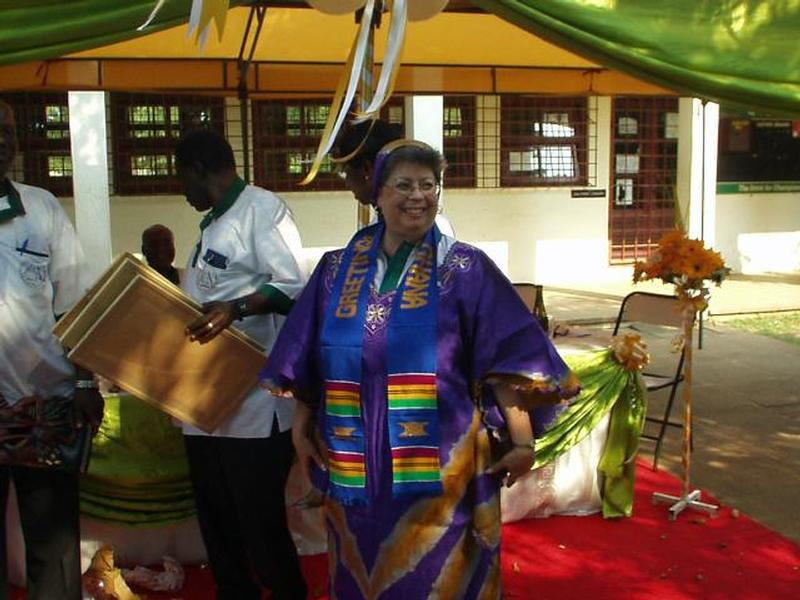 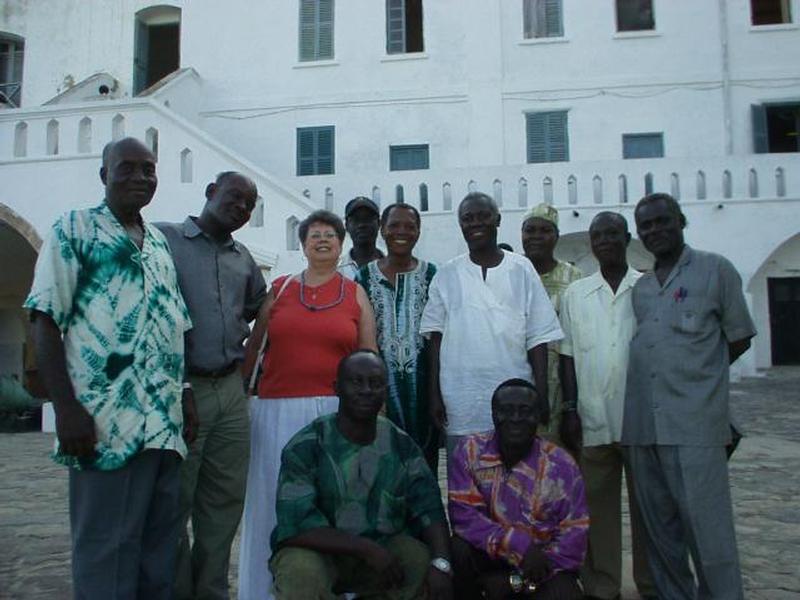 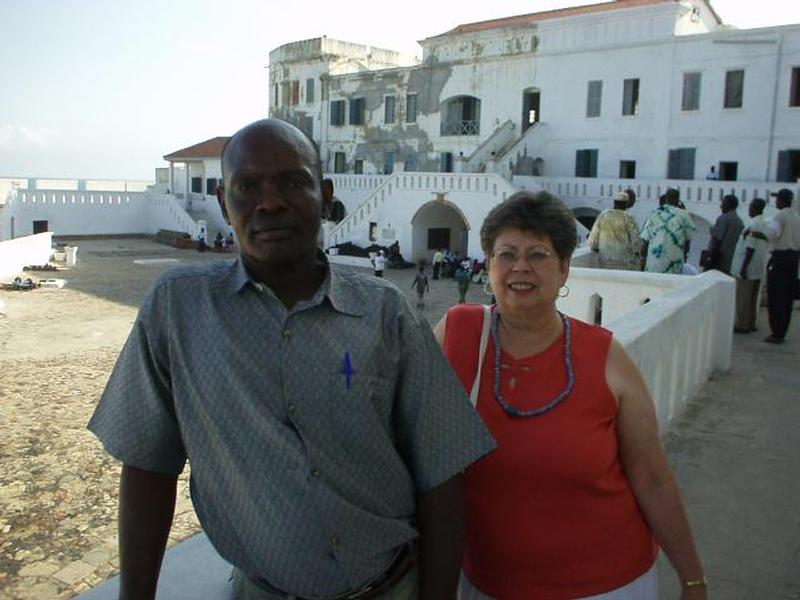 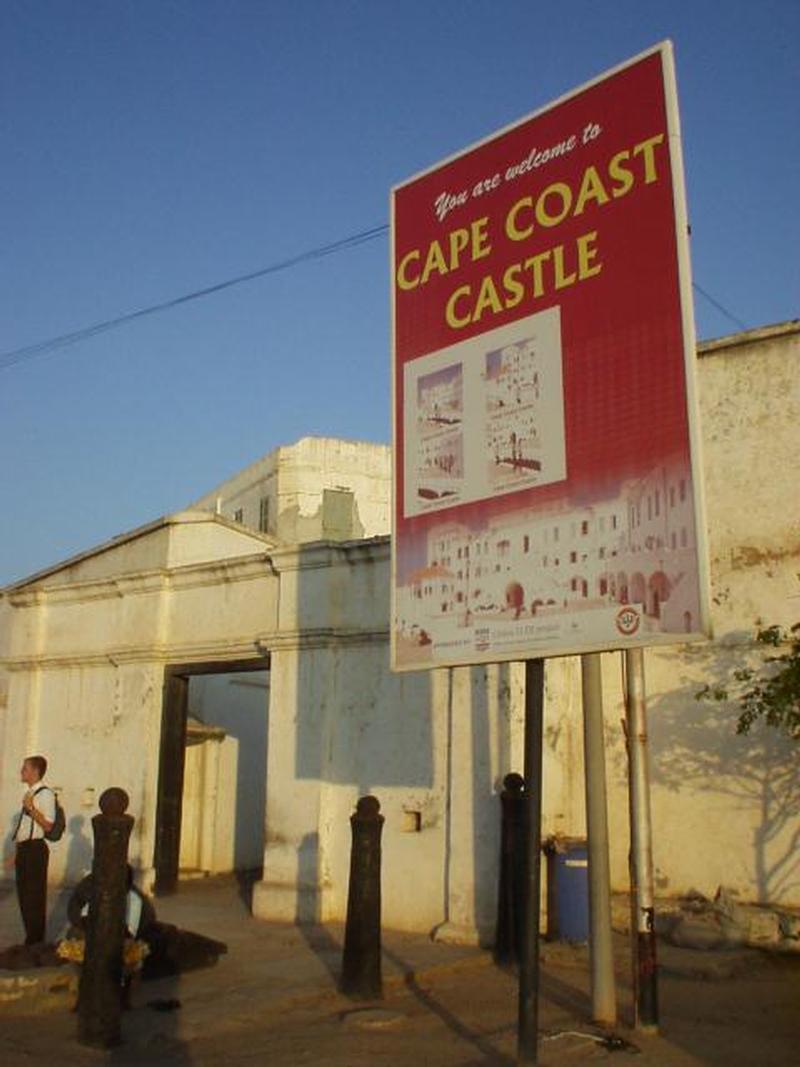 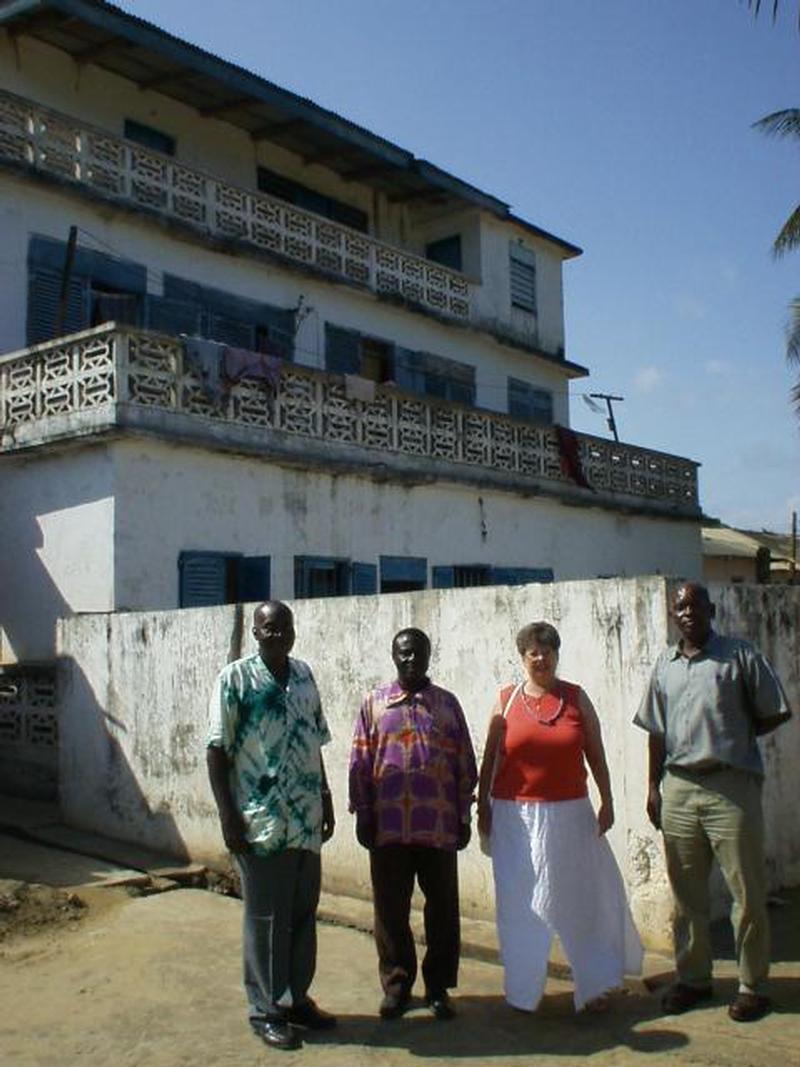 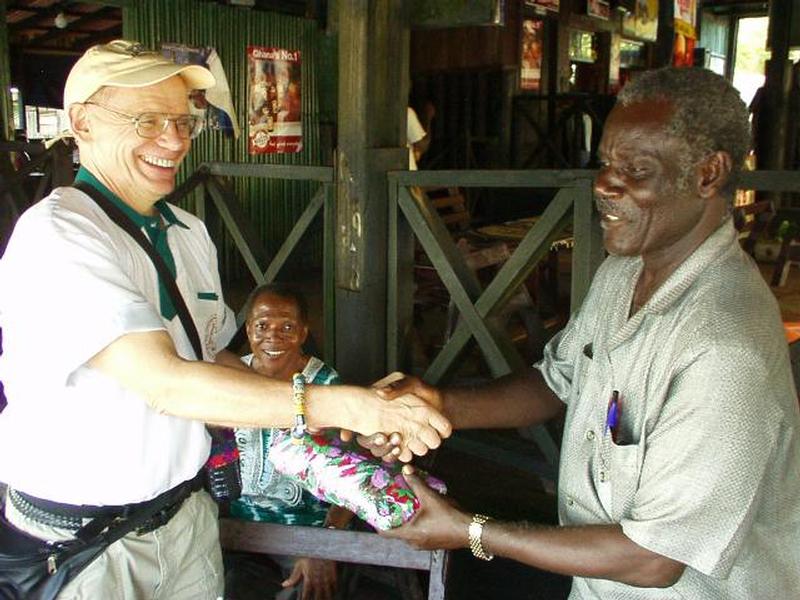 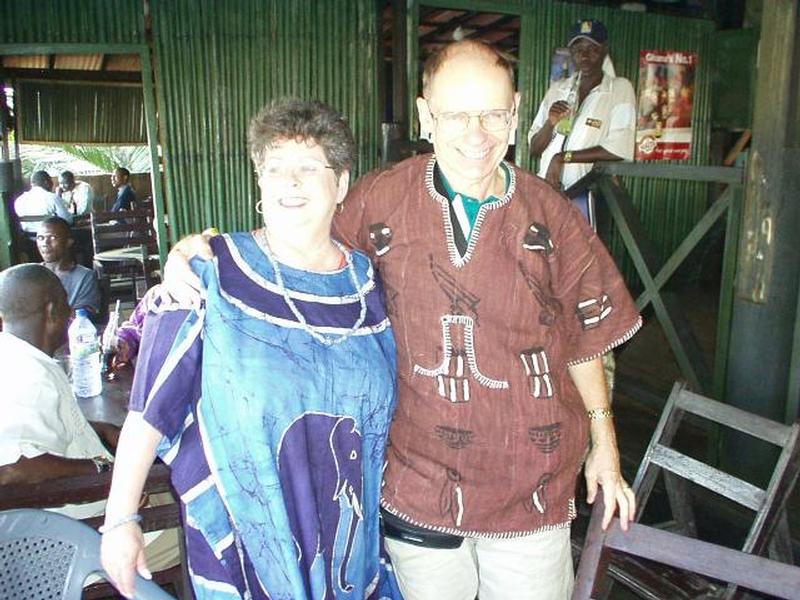